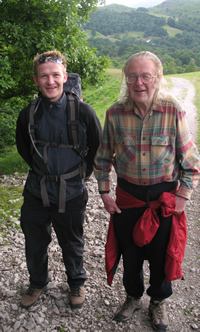 The idea of this trip was sprung on me moments before departure, so it was pretty much a pack and go sort of exercise. Wayne & Keith came to pick me up at around 12:30 and we headed straight to Ambleside via Chesterfield for supplies. We arrived there at around 1800 and parked at Rydal which was the finishing point for tomorrow, we then walked back down the road to Ambleside.

After a quick refreshment stop we headed for the starting point which was Nook End Farm NY376054, While there we met a really nice chap called Phillip Lader who at 75 was an absolute inspiration, He recalled his mountain adventures in Britain and told us stories of Himilayan trips. Phillip walked with us to Low Brock Crags then returned to Ambleside, We carried on North towards Low Pike NY374078, Then over High Pike NY374088 then along towards the Summit of Dove Crag NY374104. We then decended and traversed around the northern face of Dove Crag and Scrambled to the Priests Hole.

The Priests Hole is a legendary cave on the North Eastern face of Dove Crag, Approximately 700 metres above seas level and with coordinates of NY376109. It was our base for the evening and the weather was perfect which allowed us to make the most of it.

We had carried some firewood with us which we had harvested from a dead tree below Low Brock Crags, it had added lots of weight to our packs but it was certainly worth it. We got a fire going that Ray Mears would have been proud of and cooked our meals on it. The fire was perched on the cliff edge above the 300 meter drop were we sat relaxed, Listened to Music and chatted until it went out at about 02:20. 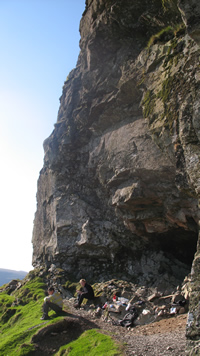 We awoke relatively early today considering last night was a pretty late one, We got up and made a brew and breakfast. The weather was absolutely glorious today and we had fantastic views of the surrounding fells and down Dovedale towards Brothers Water. We packed our gear and took some footage and pics of the Priests hole before leaving.

We scrambled back down + across then stocked up our water supplies before heading back up to the ridge. the first summit of today was Hart Crag NY368112 which we reached in no time at all, then it was up and along to Fairfield NY358118 which has fantastic views north towards Helvellyn and Striding edge. The cloud cover had thickened slightly but no rain arrived and it was still fairly warm. We stayed a while at the summit of Fairfield while taking pictures etc, As we were stuck for time today due to commitments later that evening we head southward towards Great Rigg.

We reached Great Rigg NY356104 in no time at all, Heron Pike NY356083 was upon us quickly too and that was our stop for a refreshment break. We had some fantastic views back up to Fairfield then south towards Windermere.

We decided to pick up the pace and descended via Nab Scar NY355072 in true fell running style. We ended up back at the car in Rydal at around 1315 then it was straight home via Kendal for a lunch stop. I thoroughly enjoyed this little trip, The Priests Hole cave was very impressive and it was one of the final ticks on our strange sleeping places check list. I’m sure my travels will bring me to this place again some time in the near future hopefully as it is a spot of outstanding beauty.