After a relative drought when it comes to walking I decided I would head out come rain or shine today. The forecast was for high winds and also plenty of rain but I thought what the heck, I’ll just go for it. A quick call to my mate Andy and the plan was set. We would park at Ladybower, Ashopton Viaduct to be precise and then head up and over towards Rowlee Pasture to Alport Dale.

The weather looked reasonable as we set off from Ashopton Viaduct but I knew we were going to get blown around a little, the forecast was predicting that the wind would really pick up towards midday and it wasn’t far wrong. When we got up onto the bridleway near Crook Hill the icy wind was hitting us head on, the views however were great as Kinder and Bleaklow were dusted in a light covering of snow. The following image is a quick stitch of 5 images looking up the Vale of Edale towards Mam Tor, Brown Knoll and Kinder Scout. It’s not seamlessly stitched but you get the idea.

From Bridge-End Pasture we headed towards Lockerbrook Heights and up on to Rowlee Pasture. Once we reached the edge path above Rowlee Farm the wind had changed direction slightly and was rushing up the hill towards us. It felt extremely strong at this point and we were able to lean right into the wind with our arms held out and it supported our weight, it was an excellent feeling indeed. I’m not going to predict how strongly the wind was blowing as people tend to over-estimate things like that, I’ll just let you have a quick look at this video and say that it made walking pretty difficult. 🙂

After the fun of messing about in the wind on Rowlee Pasture we kept moving as best as our balance would allow towards the equally wind-swept Alport Castles, it was between these two points that it began to rain. It began to rain what felt like bullets 🙂 The icy wind was whipping the rain / hail right at us horizontally and we were relieved that it only lasted 15 minutes or so. 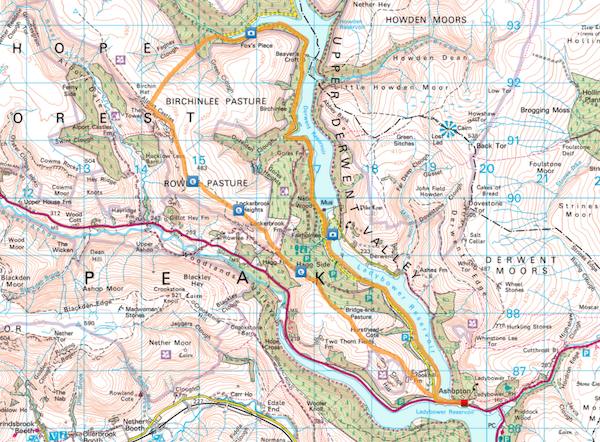 From Alport Castles we head back down hill towards Howden Reservoir and as we descended the wind died down to a small breeze. The Chain of Reservoirs in the upper Derwent Valley (Howden, Derwent and Ladybower) were looking nice and full today, I’m not surprised though as we have had plenty of rain and the odd bit of snow in the last few weeks to top them up. The Howden Reservoir’s level was very close to tipping over the wall and creating that stunning waterfall effect down the other side.

We made a quick stop for a warm drink at the cafe at Fairholmes and we were glad we did, as we drank our coffee the heavens opened and it absolutely chucked it down.. which I do believe is the technical term haha. Once the rain had calmed down a little we began the final gentle stroll back along the road to our cars at the Ashopton Viaduct. As its nearly Christmas we stopped off at the nearby Yorkshire Bridge inn for more coffee and a festive Mince Pie with some Mulled Wine.

I decided that I would do a quick AudioBoo as a summary of today’s wander. I intend to keep up this practice for the foreseeable future so would welcome you’re feedback, yes I am a local lad so expect Derbyshire accent a plenty 🙂 Thanks for reading, viewing and listening.