I’ve just got home from a fantastic meet up in the Peak District with my friends from Social Hiking – ShareYourAdventure.com. It was great to finally meet some of the people who I’ve been chatting to for the last year or so, we have all become friends while Sharing our Adventures on this fantastic website that was created by Phil Sorrel. The weekend event took place at Monsal Head but I could only make the Friday night and Saturday daytime due to other commitments.

Friday was a great day indeed, I had been out filming that day with another twitter friend and landscape Videographer Terry Abraham. He is producing a video for Karrimor and I am his model for this particular shoot (More Details of this to follow very soon). We started by heading to Curbar Edge to get a few shots but eventually made our way to Padley Gorge near Grindleford. I had not been to this lower part of the Gorge before and was very impressed by it. I have walked the upper part in the past while out Geocaching but it was nice to finally explore it’s entire length.

We called off at Monsal to record some footage of Karrimor’s new footwear on the viaduct, then some quick shots in the Headstone Tunnel, we then got back in the car again and headed over for a quick visit to the Royal Oak at Hurdlow. As the weather was pretty flat today we deciding not to film any more and made our way to the Park House Campsite at Monsal Head to await the arrival of the others for the meet up.

A great night was had by all in the Stable Bar at the Monsal Head Hotel and I retired to the tent only to be rudely awoken by the crows in the trees above at around 4am. I had a rather thick head from the fine ales consumed so I stuck my headphones in and managed to drop back off to sleep. 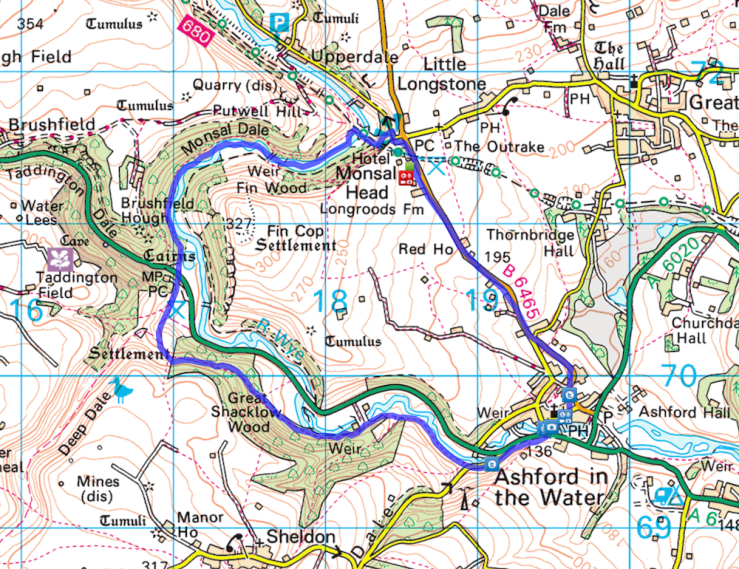 After breakfast we said our goodbyes to Terry who was heading home and the rest of us set off on a walk down Monsal Dale. We were following a route I had walked before which I originally started in Bakewell (Peak District – Bakewell and Monsal Loop).

The Video above was streamed live via Bambuser by my friend Pilgrim Chris as we set off from the camp site on our walk. find Chris’ website at http://www.pilgrimchris.com/.

The weather today was not too bad considering that in the previous weeks we seem to have had nothing but rain. It was rather grey and the sky was a very flat white which didn’t make for very good photographic conditions, I had to stick to using my iPhone to take a few snaps of the day.. basically I had no choice as foolishly I had forgotten to bring my DSLR 🙂

We had a great wander down Monsal Dale while chatting and taking in the stunning views. We then crossed over the road and headed up along the path into Great Shacklow Woods.

The route we took then rises and falls back down to follow the River Wye to Ashford-in-the-Water, we decided that it would be another perfect opportunity to sample the local ales by stopping of at the Bull’s Head. I only had a shandy as it was fast approaching the time for me to make my way back to the car to head home, I said my goodbyes and then headed straight back up the road to the campsite where I had left my car.

It was nice to finally meet up with so many great people who have been using ShareYourAdventure.com for what seems like a long time now. I really hope to see them all again soon at another event in the not too distant future. So what am I doing tonight? Well… I’m heading to Nottingham to see Thin Lizzy and Guns N’ Roses, admittedly it is a very stark contrast to the last couple of days but as they say variety is the spice of life :-).