It’s always great to return to an old favourite, walking routes along the southern edge of Kinder Scout is where I first cut my teeth with proper navigation. It is along this edge that my friends and I first set foot on this great mountain, longer ago than I care to recollect. I remember the day well, we had camped at the Field Head Campsite, the weather was absolutely terrible but we got out our map and compass and headed off on to the plateau. It was a scary experience but all went well, we had practiced navigation many times before while in the Army Cadets so were pretty confident. We walked up Grindsbrook, along the southern edge to Crowden and then off up Crowden Brook to the centre of the plateau. It was a great experience, one which I will never forget and one which I think of every time I’m up on Kinder.

Today’s walk started at Barber Booth, from the car park at SK 1079 8473. I arrived there at 09:00 after dropping my daughter off at school, I had limited time today so it was to be a relatively short walk today. The weather had been terrible in the days prior to today and I had been holding off for this very short weather window. Boots on, bag on, fresh air in my lungs and off I went.

From the car park at Barber Booth I headed for Upper Booth, passing Lee House and then onward towards Jacob’s Ladder. 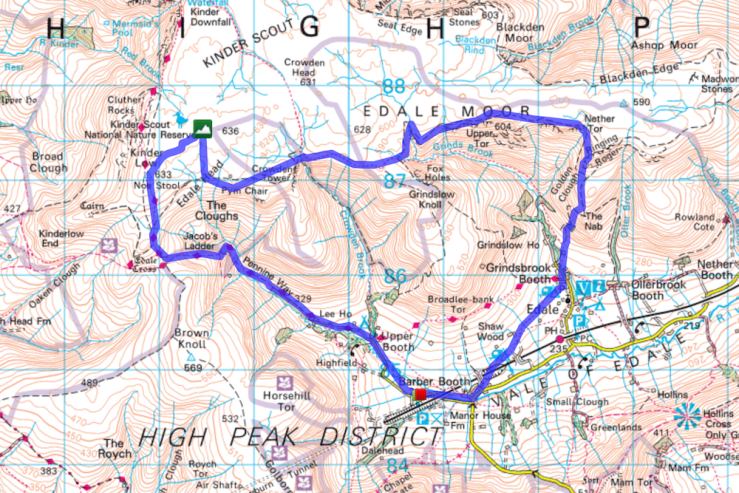 Jacob’s Ladder was the first real incline of the day but the sun was shining so it was easily taken care of. As I climbed up towards the head of the valley the cloud began to thicken and drop to cover the top of the plateau. While walking up Jacob’s Ladder I realised I was walking along the Pennine Way once again, It was the first time I had set foot on it since my friend Chris and I walked the southern section from Edale to Thwaite back in April 2013.

Once I had reached the edge path near Swine’s Back I was just skirting below the cloud level, The Pennine Way then carries you up towards the Kinder Low Trig Point so I took a final look down in to the valley and then headed up in to the mist.

I must admit, for a long while I had just assumed that the trig point here at Kinder Low was the summit of Kinder Scout. I’m not the first person to think this and I’ve no doubt I won’t be the last. It was only around 6 or 7 years ago that I actually decided to check online and find out for sure. I had always known that Kinder Scout was 636 metres above sea level at its top but like I say I had assumed the top of the trig at Kinder Low took the crown. The official summit however is off to the north east of the trig and since I have been shooting a lot of video of late I had decided to pay another visit there today.

The walk across to the official summit area is rather tricky when there has been lots of rain, the plateau holds a lot of water and it is hard to find a dry way across. I used my compass and followed a bearing from the trig point at Kinder Low and picked my way through the bog as best I could. There really is no path out here, I won’t give out the exact bearing I followed just incase it inadvertently gets you in to trouble 🙂

The summit area which stands at 636 metres is rather uneventful, no grand cairn, no mighty trig point or memorial plaque. All you get is a small tuft of grass which you can see in the background of the picture above. The pile of stones is a rather cruel decoy but makes for a more interesting image than the tuft of grass. As you can see from the images and the video there really wasn’t much to be seen up there today, however, that is one of the great things about Kinder Scout in these conditions. You really do have to have sharpened your skills with navigation before heading up on to the plateau when the cloud is down, as you can imagine there aren’t many ways of telling which directions is which when you are in the centre of the plateau. I always have my iPhone and I use an app called ViewRanger to track my walks, however, it cannot be relied upon for real navigation as it has a tendency to switch off when cold and it had done so just after I left Kinder Low.

After a short while taking in the silence at the official summit I made my way due south as best as I could until I found a stream running down a peat grough. I find this is the best way to get off the plateau, It’s no use trying to stay high on the peat as you just end up climbing up and down. I followed the grough until I appeared out on the southern edge once again just to the west of Pym Chair.

I decided that the perfect spot for lunch would be Pym Chair as I could find myself a nice sheltered spot out of the wind. I could have quite happily sat there for hours watching the cloud roll up from the south west.

After my lunch break I made my way through the Woolpacks and over towards Crowden Brook, the place where my friends and I had first ventured off in to the plateau all those years ago. Thankfully the weather was slightly better today and I had a spring in my step while I reminisced about old times with my friends in the Peak District. Now days, more often than not I tend to walk alone, that’s not because I’m antisocial, it’s mainly due to the fact I only ever walk during the week as when I do get weekends off they are devoted to family time.

After Crowden I made my way along the paved section of the path towards the top of Grindsbrook Clough. I still hadn’t seen more than 1 or 2 people during the whole walk and it really did feel like I had the place to my self as I surveyed the view down Grindsbrook.

I was making good time today so I decided to continue with my original rough plan of heading for Ringing Roger, Grindsbrook was a cut off point in my mind, If I was running late I could head down here or even head off the southern side of Grindslow Knoll down Broadlee-Bank Tor. I made my way along the edge path past Upper Tor where I began to sing the famous song “The Manchester Rambler”, Upper Tor is mentioned in the song so I had it stuck in my head from this point onwards 🙂

There are some great Gritstone Rock Formations up on this part of Kinder, it never fails to amaze me how mother nature can erode the stone in to such fantastic looking shapes.

From Ringing Roger I quickly made my way down towards the valley floor, my commitments that afternoon had just been brought forward by another hour so I kicked in to high gear for the final part of the route. In no time at all I was crossing the bridge over Grinds Brook and then I found myself outside the Old Nag’s Head, the southern terminus of the Pennine Way… So many great memories here, alas there was no time to stop for a pint today so took the footpath over the fields from the side of the Post Office.

The Helicopter was out again today, I had seen it most of the day going backwards and forwards lifting stone over towards the Kinder Downfall area. I do believe it is the Helicopter that is working on behalf of Moors For The Future who are doing great work in their continued conservation effort up on Kinder and other moorland further north. Head on over to their website if you would like to find out more about the work they do – http://www.moorsforthefuture.org.uk.

In no time at all I found myself back at the car park at Barber Booth, just in the nick of time might I add too as the rain had just arrived with a vengeance. It had been another great walk and I was pleased that I had managed to drop lucky with the weather window as it really has been terrible lately. The walk had been around 10 miles and it felt like had successfully blown away the cobwebs after very little in the way of Peak District walking time lately. As always, thanks for taking the time to read, watch or listen to the content from today’s route. I have had some really humbling messages lately from friends and supporters of Peak Routes and it always makes my day when I get feedback or comments.