This weeks wander sees me return to a route that has become a firm favourite, it’s one of those routes that I could quite happily do again and again as every time it feels different. Birchin Clough is a great place to start a walk, there are so many great options and you can sample long or short hikes from there.

I set off from the car park and made my way down into the forest at the Snake Plantation in Lady Clough. I know that pine forests aren’t really native to this part of the world but I can’t help enjoying them, being amongst the trees next to the river makes me feel like I’m a million miles from anywhere (work mainly).

I followed the path northwards as it weaves in and out of the trees while rising and falling away from the river’s edge. Even though the noise of the Snake Road can be heard at times there was nothing today other than the sound of birds, the river and wind rushing through the trees. 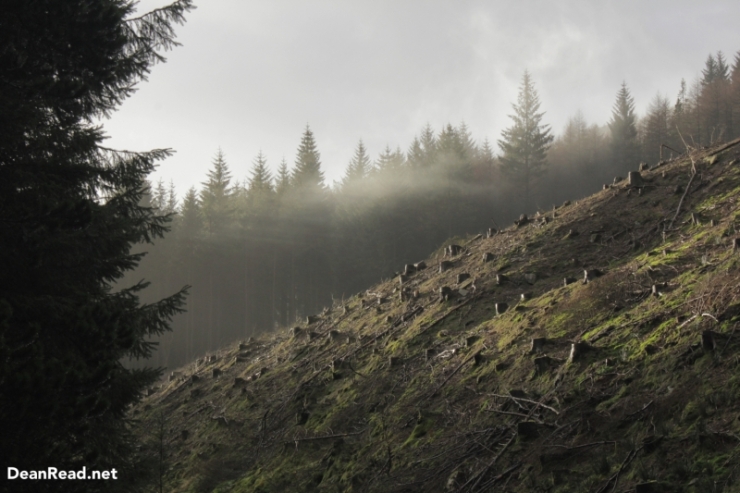 Once you get to the edge of the forest you then begin to walk alongside the road itself, as always at this point I get very disappointed by the lack or respect for environment that some people have. Litter is plentiful here, it’s such a shame that there is a minority that seem hell bent on spoiling the landscape, not just here, everywhere but I think I’ll leave that topic for another day as it’s something I feel strongly about. 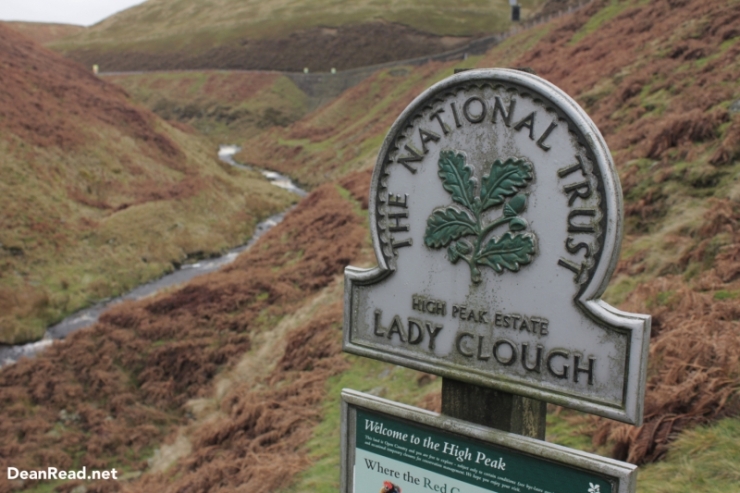 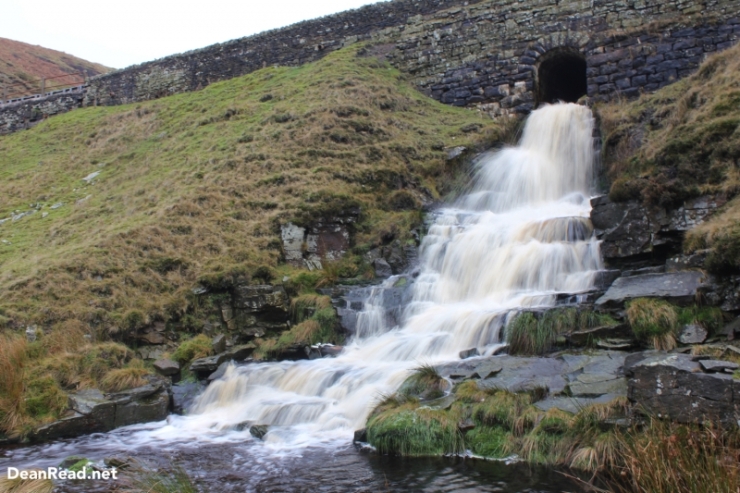 After walking alongside the road for a short while it was time to cross over and join the Doctor’s Gate path which takes you up to the Pennine Way and the Snake Summit. 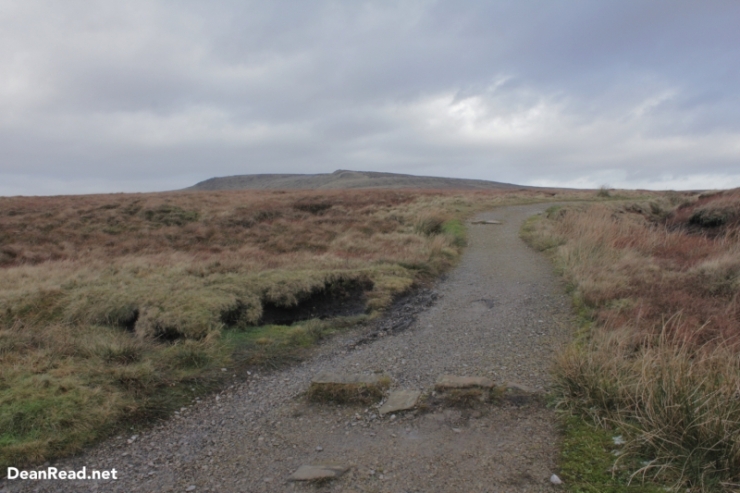 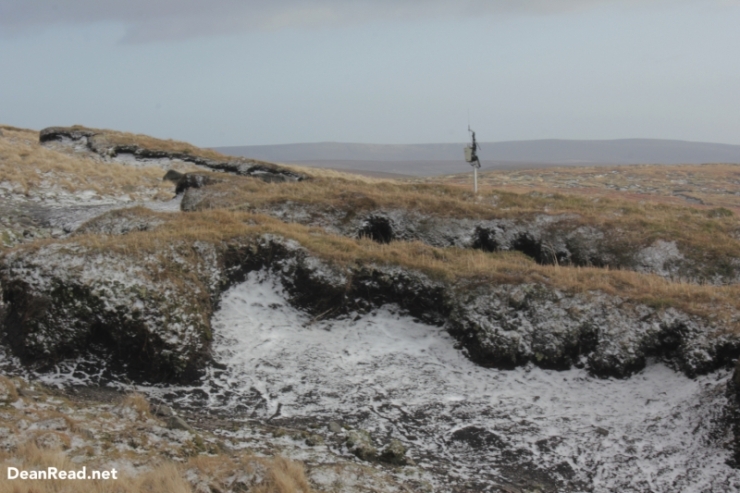 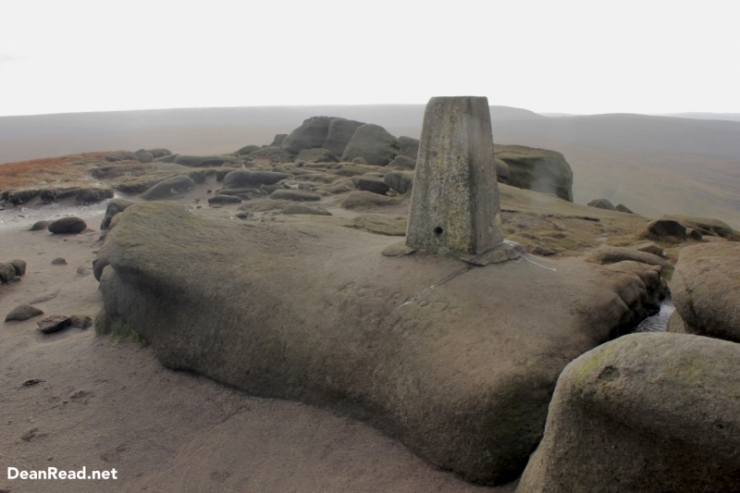 I walked along the Pennine Way for a while before deciding to head off piste directly towards the trig point at Higher Shelf Stones. It was a nice gentle climb and the views are absolutely stunning from here towards the west and back in the direction I had walked from.

The wreckage of the B-29 Superfortress “Over Exposed” is only a short walk from the trig point at Higher Shelf Stones, you can almost see it if you head directly north east for around 100 metres or so. “Over Exposed” sadly crashed here on the moors on the 3rd November 1948. It was making a routine flight from RAF Scampton in Lincolnshire to what was once the vast logistics base at Burtonwood on the western side of the Peak District. RAF Scampton only had a small American contingent based there which meant they had to make the journey over to Buttonwood regularly for resupply and to collect mail. “Over Exposed” had a full crew on that faithful day and the pilot in control was Captain Landon Tanner, it is not fully known why the crash happened that day. Captain Landon Tanner was an experienced pilot who had flown that route many times before, he would have also known that he was crossing high ground but an altimeter fault is suspected. If you would like to read an in-depth analysis of the crash then you can visit http://www.jarrelook.co.uk/ where I got some great info before my first visit. 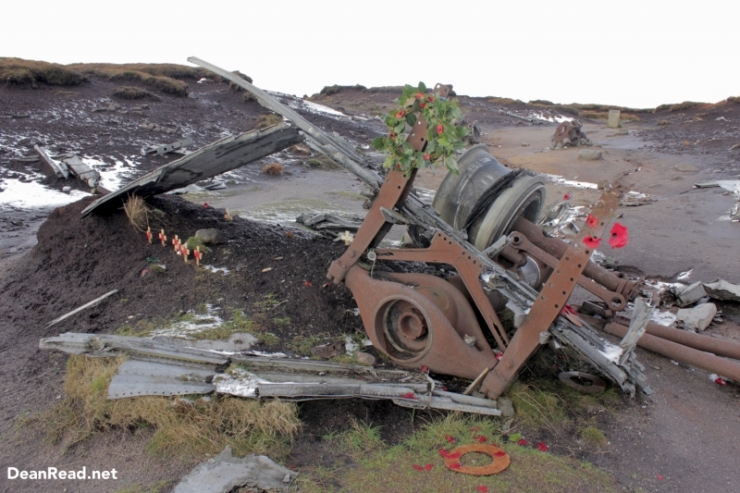 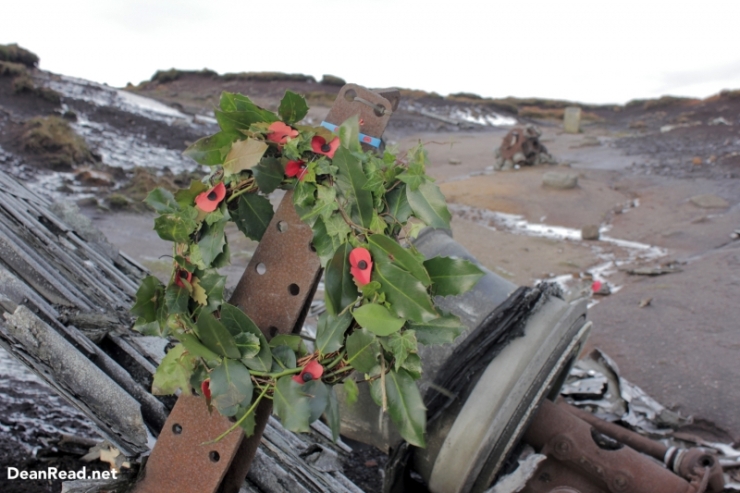 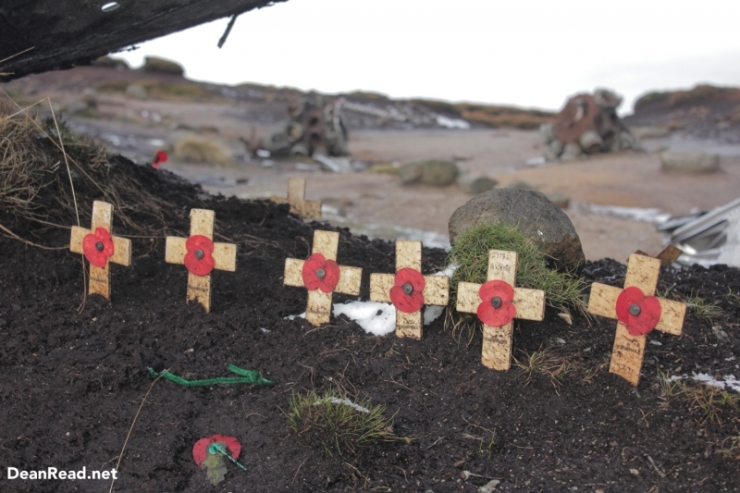 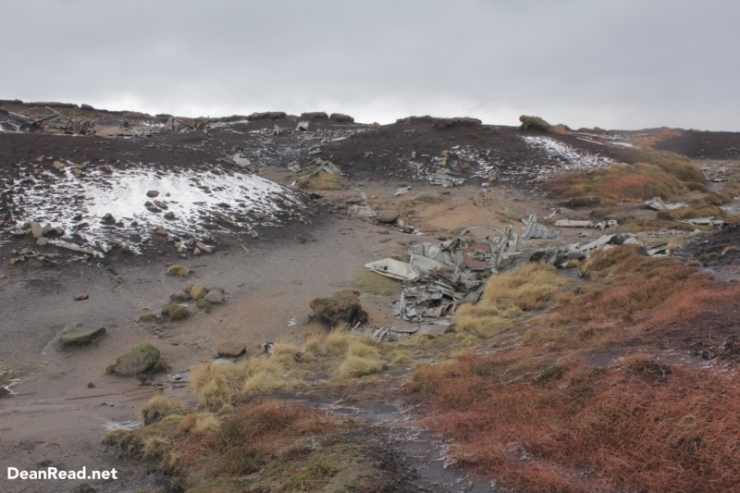 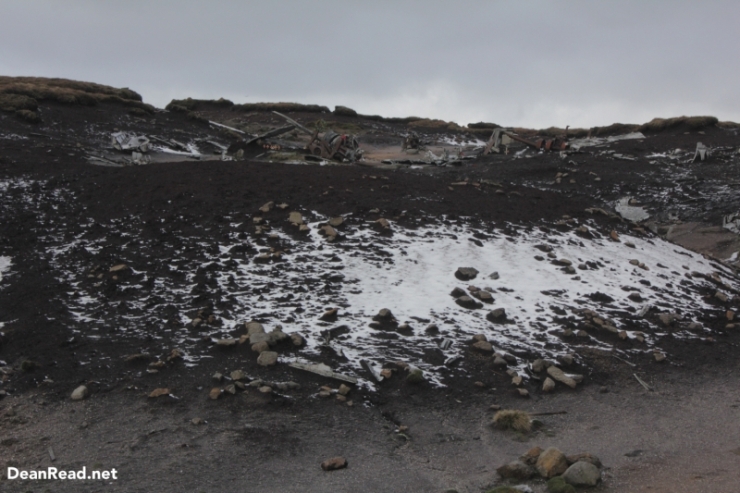 After my visit to the crash site I headed over the moors towards Alport, I had to climb in and out of many peat groughs to avoid going across the boggiest sections. It is always a trade off when crossing these sections of the moors when it has been raining heavily in the weeks prior to your visit. If you walk along the highest spots I find that it can be very boggy indeed and you are forever weaving around the worst sections. If you are off the top you will have to cross the beginnings of the cloughs which carry the water off down into the rivers, some of the cloughs can be very steep and its hard to climb in and out of them. It’s all trial and error I guess depending on how much rain there has been before you go. 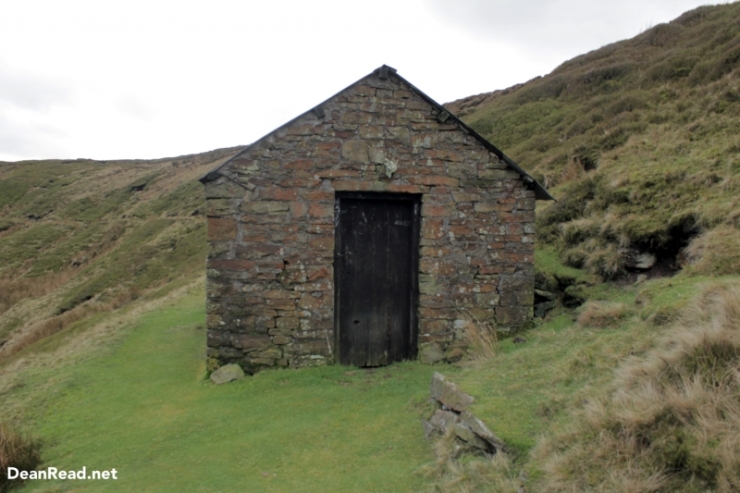 As the weather today was very changeable I had decided I would head for Oyster Clough to visit the perfect place to have a spot of lunch. The shooters cabin here is very handy indeed as it has a table, chair and offers a nice sheltered place to get out of the elements. I arrived at the Cabin / Bothy just as a hail storm arrived so I was glad to be out of the way so I could settle down and intake some food after the slog across the moors. As you can see in the image below there is a guest book there too so I’d highly recommend checking it out and leaving your mark.

After the video included in this post went live on YouTube a few of the viewers decided they would head off to the Cabin. They very kindly mentioned me too when leaving a message in the log book, Wayne of Walking Tales and Photos very kindly sent me an image of some of the messages left in the weeks after my visit. 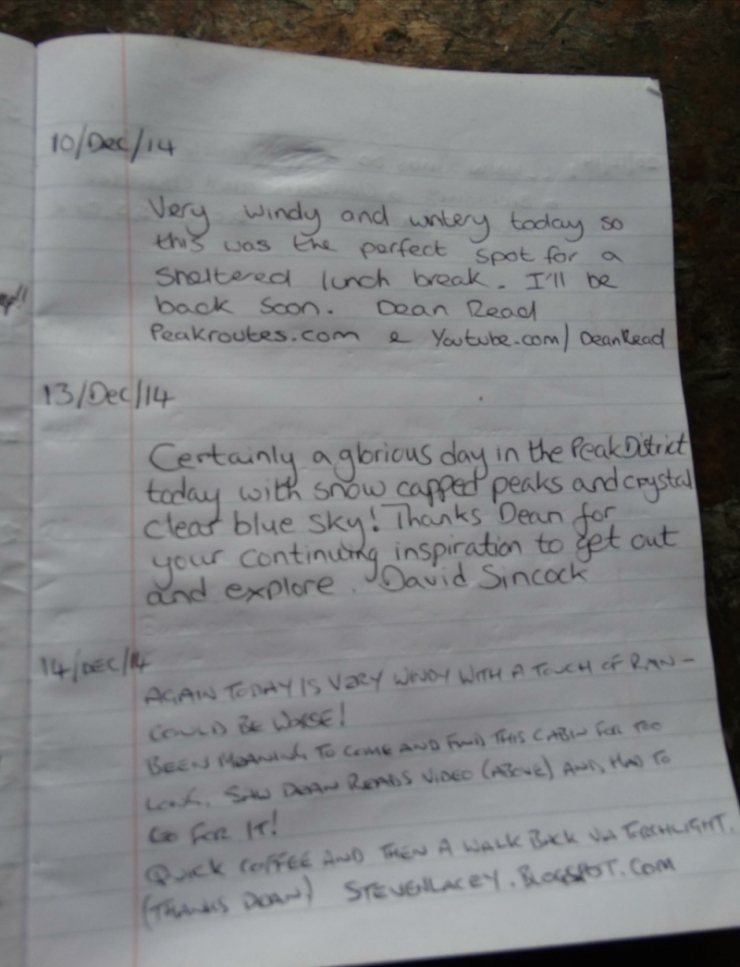 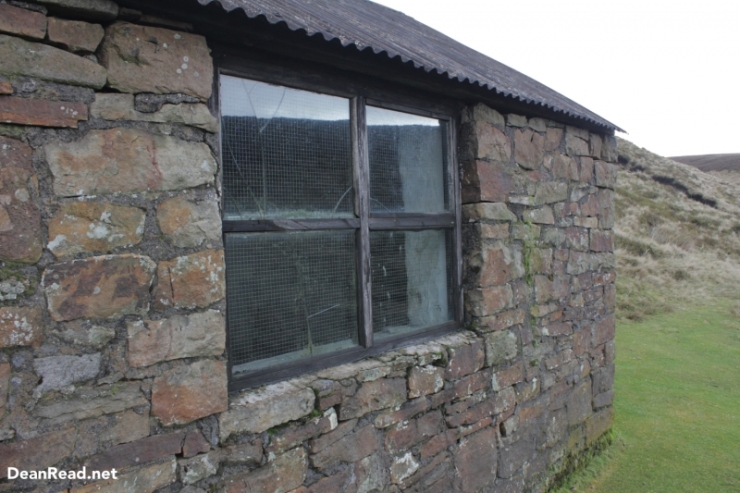 After a good 45 minutes relaxing in the bothy while listening to the wind I decided to head back toward my car at Birchin Clough. I had just about enough time to take one more image off the bothy before another hail storm arrived I had to put my DSLR in my bag and resort to GoPro.

It was only a short walk from the bothy to the relative cover of the Forestry Plantation on the hills above the Snake Pass Inn. I then walked through the tangled remains of freshly cut pines and new saplings that had been planted to replace those that stood before, It’s all part of the life cycle of a managed woodland I guess…. In no time at all I was back to the car at Birchin Clough and another great day out in the Glorious Peak District had come to an end, as always thanks for watching, reading and viewing.

1 thought on “Peak District – B-29 Superfortress Bomber & A Bothy”