I’ve been reminiscing a lot recently about adventures with friends, great times spent camping and hiking in the local area and further a field. It came to my attention recently that the first time I recorded video or took pictures of us camping at the Bushcraft Forest was back in October 2006. In the years since then we’ve created lots of great memories and in this video I talk about some of those times and share a few video clips too.

I started the day by walking the same route we did on that trip back in 2006, the sun was out, the sky was blue and it was absolute bliss. We’d had some pretty bad weather in the weeks leading up to this outing so it was really great to be out in the sunshine and enjoying the outdoors. I’m not sure why but winter this year has really got to me, the lack of daylight hours and miserable weather doesn’t agree with me.. Roll on spring that’s all I’ll say 🙂

When I arrived in the forest I found that Ray and Jay had chosen to camp in the original spot, when I say original spot I mean the one that we always used back in the early days. It has only been in the last couple of years that we moved further up in to the forest after finding lots of rubbish in the original place. When Ray and Jay arrived they found that spot number 2 had been pretty much destroyed by what looked like a hundred pairs of boots and was just a muddy mess. Anyway…. I’d been saying for a long while that I had a few camping bucket list items, one was to camp in a cave and we managed to tick that off a few years ago (Peak District – Thirst House Cave – Bivvy Wild Camp). I’d also mentioned that I really wanted to sleep up a tree, the mighty giant that once stood in the Bushcraft Forest was to be the chosen one but sadly it fell down in high winds about 4 years ago. Since then it has become be known as the “Spider Tree” due to the look of its branches that now reach out in all directions. Today though I thought, why not, I’ll hang my hammock from the branches and sleep up it 🙂 Yes, I know it’s not technically up a tree but I did have to jump to get inside the hammock so it’s partially up.

I had dropped the guys off earlier in the day before walking up to the forest, they had pretty much done all the preparation work by the time I arrived. After setting up camp they had gathered lot’s of dead fall to keep the fire going for the night. 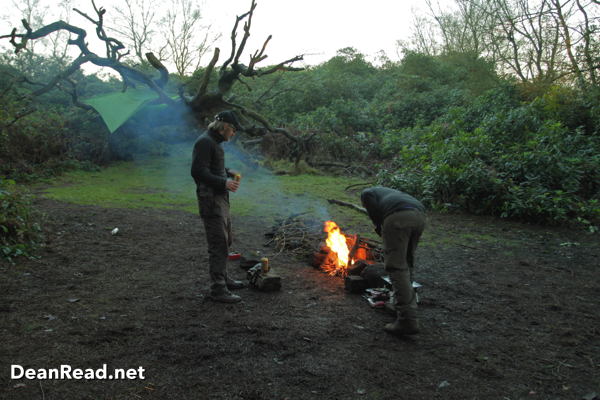 As luck would have it we had decided to camp on Burns Night so I picked up a Haggis to cook on the fire, I also took a few sweet potatoes as I thought it would be a good substitute for Neeps and Tatties. I let the haggis simmer away in my Zebra Billy can for around an hour by placing it in the embers of the fire. It was cooked perfectly and tasted pretty darn good.

My Zebra Billy has certainly seen some action over the years as I had it with me on that trip back in 2006 and it’s still going strong. I’ve used it lots of times in the forest and while out wild camping. I’ve chucked it in the fire and stood it on the top of my gas stove, its high quality stainless steel construction has meant it has lasted well indeed. If you are in the market for an inexpensive pot for camping then I’d recommend the 12cm version that can now be bought via Amazon.

The music in the video is a remix I did about 6 months ago of a track by Dorothy Moore called “Misty Blue”. I used this song as the lyrics talk about “it’s been such a long, long time” and the fact that she can’t “get you off my mind”. I feel like this towards the Bushcraft Forest at the moment. It has been on my mind a lot lately and due to the recent increase in traffic there seems to be a lot more litter up there at the moment. The forest holds so many great memories for my friends and I to the point where I have become emotionally attached to the place. It hurts to see it a mess up there and It’s just a shame that not everyone has the same “Leave No Trace” attitude. I know I need to let go emotionally but as the song say’s “I should forget you, heaven knows I tried” but I can’t.

We also had a surprise visit from our friend Steve aka Frogmoon wildcamps and wanders on YouTube, he came up to say a quick hello with his wife Caz and even bought us some beers. As is always the case, we had a great night out in the forest and lots more memories were created. I’ve not doubt we’ll look back on this period in or lives with as much fondness as we do those early days from over a decade ago. If my family and I are healthy, happy and I still have a great circle of friends in another 10 years time I’ll consider myself very lucky indeed.

All music by Dean Read. Footage shot with a Canon EOS 7D DSLR with a Canon EF 50mm – f/1.4 USM Lens, Canon EF 17-40 mm f/4.0 L USM Lens, RODE VideoMic Go Microphone with a RODE Dead Cat Wind Protector. I also use a DJI Phantom 4, a GoPro Hero 3 Silver, an iPhone 6 Plus and it was edited in iMovie.